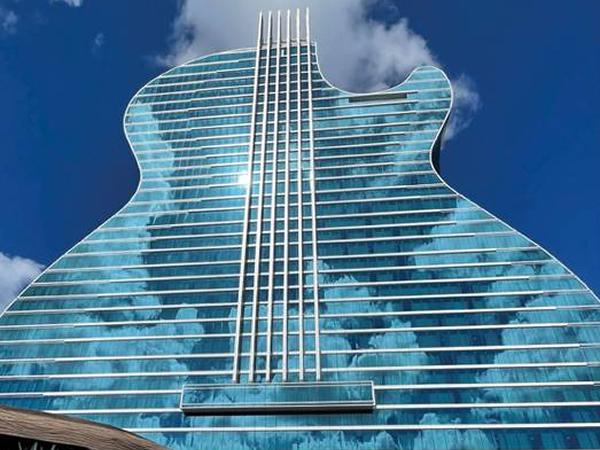 Stunning six-string edifice strikes a chord on Hollywood, Florida skyline thanks to SentryGlas® – both inside and out.

Casinos are renowned for pushing the envelope in terms of building design and the new Seminole Hard Rock Hotel & Casino in Florida is no exception.

Rising 137 m (440 ft) above the ground, clad in glass and millions of lights, the Seminole Hard Rock Hotel & Casino in Hollywood, Florida – the world’s first guitar-shaped hotel – is really hard to miss.

Designed by Klai Juba Wald, the 34-story building is, without a shadow of doubt, a landmark during the day. And, thanks to lightshows – generated by 2.3 million LED lights, video mapping and lasers, combined with its façade’s reflectivity – it’s impossible to miss at night.

Even though the hotel is in Florida and subject to stringent hurricane-related building codes, glazing is widely deployed and plays a vital role, not just in delivering striking aesthetics, but also in imparting robustness and functionality, thanks to the SentryGlas® interlayer from Kuraray.

In addition to the façade, SentryGlas® laminates are part of the lobby entrance, shopping, and restaurant areas – including a complex curved glass wall with curved sliding doors, that enclose the Butcher Shop, at the Council Oak Restaurant. The laminated glazing continues onto a spectacular indoor water feature – based around a 12.2 m (40 ft) diameter glass cylinder – called the Oculus, which is comprised of fourteen panels of custom-laminated glass, some with a projection film applied. SentryGlas® is also used in the guest rooms, for the balcony railings and even the shower doors, which were supplied by Continental Glass. In both instances, laminated glass helps to ensure occupant safety and protection.

According to Ron Hull, America’s Marketing Manager at Kuraray: “Panels laminated with SentryGlas® are used in multiple varied external and internal locations, primarily for their in-service and post-breakage strength, stiffness and outstanding clarity and light transmittance. This is one of the best examples of a multi-location SentryGlas® installation that I have seen to date.

Noshad A. Shamshad, owner of NR Windows, the façade contractor, explains: “We deal with lots of different glass types, but in this region almost all of them are specified with SentryGlas® interlayers. In this instance it was chosen due to the stringent building codes and the intricate geometry of the building, including the architect’s demand to see the smooth curvatures. The façade comprises insulated glazed units made up of two panels of 1/4 inch (6 mm) glass laminated with the SentryGlas® interlayer, with an air gap and another 1/4 inch (6 mm) glass pane. On the curved surfaces on the east and west sides of the façade, the two plies on both sides of the air gap are laminated, to meet the safety glazing code and giving them additional strength.

“We are certainly seeing much greater use of SentryGlas® in both public and private installations and interestingly, its deployment is creeping further along the coast, as the hurricane paths migrate. In fact, we have just used it in a new casino in Mississippi, which also specified impact resistance in its glazing. This was the first casino built to meet the stringent Miami-Dade County Codes by using SentryGlas® interlayer after Hurricane Katrina devastated the Mississippi Gulf Coast. People in different areas are now starting to look more long term in the way they ‘harden’ their buildings, taking cues from the tough Florida building codes.

The guitar’s main entrance is a sea of glass as well, where minimal framing is complemented by maximum strength, thanks to Faour Glass’s SLIMPACT® system. “SLIMPACT® is the first of its kind, a patented frameless impact-rated glazing solution,” explains Angelo Rivera, VP at Faour Glass Technologies. “Years ago, a similar application was achieved by butting panels together and using silicone to join them, but Hurricane Andrew rewrote all the codes. This code change meant that in the short term, most glazed elements had to have significant framing.

Everybody just lived with it, even though the architects, who like clarity and simplicity, were not big fans. In light of these restrictions, we developed and engineered a modern, minimalistic solution for the architectural community, and our SLIMPACT® System was born. What began as set sizes years ago, has expanded to where we can now offer the ability to create panels up to 3 m (10 ft) wide and 6 m (20ft) tall, featuring SentryGlas® as its standard.

“The lobby glazing uses our SLIMPACT® XL product, with some panels measuring 2 x 6 m (6 x 20 ft),” Rivera explains, “which comprises a 6 mm (0.25 in) outside lite + 3 mm (120 mil) SentryGlas® + 12.7 mm (0.5 in) second lite + 3 mm SentryGlas® + 12.7 mm (0.5 in) inner lite. No additional testing was required for these panels and doors, however with the help of the Al Farooq Corporation, we underwent additional engineering due to the orientation of the panels, which are normally designed to distribute their load vertically.

Jalal Farooq from Al-Farooq Corporation, elaborates: “For the entrance of the hotel, the SLIMPACT® panels surrounding the five sets of SLIMPACT® doors were actually stacked vertically on their side due to the design aesthetics, so we helped develop a special support structure that allowed the loads to be transferred sideways instead.”

“We standardize on SentryGlas® for everything that is laminated; 95 % of what we do is structural in application” Rivera continues. “For both the curved doors and the panels, we had to make sure that we could deliver the maximum possible stiffness and strength, and this structural element carried through the Oculus and some of the shopfronts as well.”

Echoing Noshad at NR Windows, Rivera explains: “We too are seeing SentryGlas® being specified further away, along the Eastern Seaboard and as far north as New York. More and more communities are looking to Florida and Miami Dade to help them define their own, more stringent building codes.”

The ability to combine amazing aesthetics with code-complying strength and performance should never be discounted – no matter where you live on the globe – when it comes to life safety during severe weather events. As a result of this, SentryGlas® has become the interlayer of choice for maximum protection from wind-borne debris during a storm. With SentryGlas® on board, the best possible performance is never in doubt.

Kuraray is the global leader in PVB and ionoplast interlayers for laminated safety glass in the architectural segment.