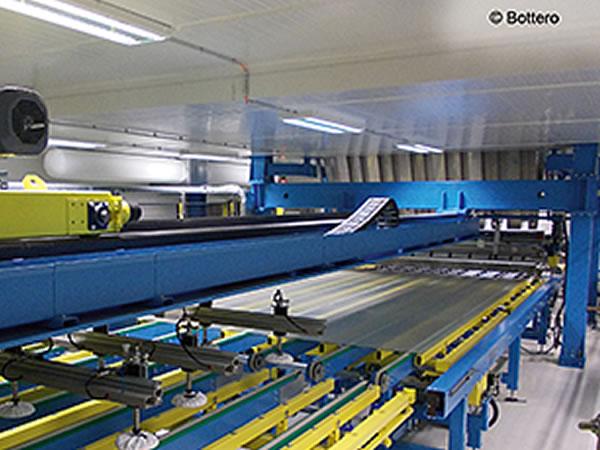 The glass manufacturer is relying on the benefits provided by Industrie 4.0 to increase manufacturing productivity and flexibility. These include comprehensive data management as well as control, drive and communications technology from Siemens. The high degree of end-to-end automation allows Bottero to offer the best possible support to its customers through process optimization and quality assurance as well as allowing small batches to be produced economically.

Bottero laminated glass lines are well-known in the glass industry for their high output levels. This plant performance is possible due to a fully automated, integrated process which starts as the plant is loaded by stackers, and continues through washing, to the addition of a range of PVB (polyvinyl butyral plastic) films. The line automatically sets itself up for film trimming depending on the glass format and type of film. Components from the Siemens digitalization portfolio are essential elements of the automation and digitalization of the laminate glass lines.

Reliable data management allows production data to be transferred to the operator’s IT system or a local or higher-level cloud such as Siemens MindSphere as required. Bottero relies on the TIA (Totally Integrated Automation) engineering framework portal for its engineering. The processes are controlled by six Simatic S7-1500 controllers, five of which have fail-safe CPUs (central processing unit). Three Simotion controllers are used for the motion control. Sinamics converters, Simotics S servomotors and Simogear geared motors, which are optimally tuned to each other, are also used to ensure the processes run rapidly and smoothly. This facilitates plant availability and reduces downtimes. End-to-end communication, including upstream and downstream elements of the plant, is provided by Scalance X industrial ethernet switches and Profinet.

Quicker and efficient – even in small batches

The high degree of automation allows Bottero to produce six by three-meter glass sheets in less than 40 seconds – approximately one third quicker than standard processes. Also, for the most part, there is no need for operator intervention and rapid production changeovers are also possible. That is a significant competitive benefit, particularly when running small batches.

Structural rigid PVB interlayers: a topic in the picture at Glass Performance Days